Try this Red Velvet-Cheesecake Layer Cake recipe, or contribute your own.

Preheat oven to 325 degrees. Set Set a pot of water to boil.

2. Using an electric mixer, beat cream cheese on medium until fluffy, scraping down side of bowl.

3. Gradually add sugar, beating until fluffy. Beat in lemon zest and juice, and salt. Beat in eggs, one at a time, scraping down side of bowl after each addition. Beat in sour cream.

4. Cut parchment paper in a circle and line the bottom of the cheesecake pan. Wrap bottom half of pan in foil.

5. Pour in filling into the cheesecake pan then place in a roasting pan. Pour boiling water into the roasting pan until it comes halfway up the side of springform. Bake until just set in center, about 45 minutes.

6. Remove pan from water; let cool 20 minutes. Run a paring knife around edge and let cool completely without removing the cheesecake from the pan. Cover the pan and chill overnight, then wrap the whole pan in plastic wrap and freeze.

8. Sift together flour, sugar, baking soda, cocoa, and salt into a medium bowl.

9. In a bowl of an electric mixer, beat eggs, oil, buttermilk, food coloring, vanilla, and vinegar until well combined. Add dry ingredients in three additions and beat at low speed until smooth, about 2 minutes after all the dry ingredients have been added.

10. Divide batter evenly between 2 greased and floured 9-inch round cake pans and bake 25-30 minutes, rotating halfway through, until a toothpick inserted in the center of each cake comes out clean.

12. Make the frosting: Beat cream cheese, butter, and vanilla together in a large bowl with an electric mixer until combined. Add sugar and beat until frosting is light and fluffy, 5–7 minutes. You can also do this by hand.

13. Assembly: Place a thin amount of frosting on the cake stand to act as a glue to prevent the cake from moving while frosting. Place the bottom red velvet cake layer on the stand.

14. Remove cheesecake from freezer, unwrap, and remove from metal bottom, then peel off parchment paper. Place cheesecake layer on top of the bottom layer of the red velvet cake. If the cheesecake is wider than the cake, and it is necessary to to trim it, wait approximately 10 minutes for the cheesecake to soften, then trim it with a knife.

15. Place top layer of cake on top of the cheesecake, and coat with a generous layer of the cream cheese frosting to act as the crumb coat. Be careful not to get any red velvet crumbs in the bowl of frosting!

16. Refrigerate approximately 30 minutes or until the crumb coating has set, then frost with as much of the remaining frosting as necessary.

17. To decorate: Top with shaved white chocolate and/or shaved dark chocolate, or pipe some patterns on top with your favourite tip. Refrigerate until ready to serve. 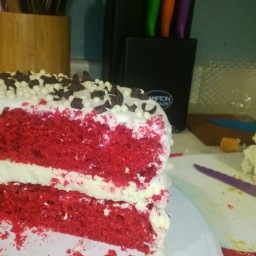 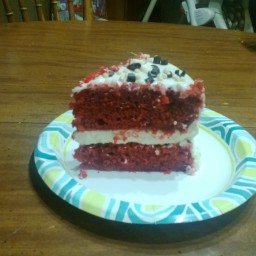 kimmyj17
Oh my its so good, and it really was pretty easy to make.
7y
Reply
Reply